Starter – A continuous mixture of flour, water, wild yeast, and bacteria that is left to ferment. Starter supplies the yeast and acids needed to ferment any sourdough recipe. Portions of the active starter are removed to make bread and other baked goods and then replaced (feedings) with fresh flour and water. Starter is also referred to as “the mother” or “leavan.”

Feeding – The process of adding fresh flour and water to the starter to revive it before baking.

Levian – A small portion of stiff dough (usually around 60-70% hydration) made with flour, water, and starter. The levian is left to ferment for up to 24 hours at room temperature before using it to start a loaf of bread.

Hydration – The percentage by weight of water to flour in a starter or dough. “100% hydration” is a starter/dough made with equal weights of water and flour. Typical bread dough is usually 65-85% hydration. The higher the hydration a dough is, the larger the air pockets will be, but also the harder the dough will be to work with. My own personal recommended hydration for sourdough starter is 100%. This makes it extremely easy to divide and multiply for recipes. My bread loaves are around 75% hydration; they are easy to work with but still produce a nice open crumb.

Crumb – The texture of the baked good’s gluten pockets inside the crust. An open crumb has large airy pockets while a dense or tight crumb is heavy without any air pockets.

Leavening – The process of rising the bread through fermentation and trapped gas.

Fermentation – The act of fermenting a food with yeast and lactic acid bacteria. Fermentation preserves food by creating an acidic or alcoholic environment where potentially harmful bacteria cannot survive.

Proofing– The time it takes for a dough to rise. Typically a bread will proof two times before baking. The first proof happens after the ingredients have been mixed and kneaded and usually requires the dough to at least double in volume. The second proof happens after the dough has been shaped and again can be as long as it takes for the dough to double in volume before baking. Slow proofing can be done in the refrigerator. Called “retarding,”  it gives the dough more time to develop and can help you time your baking.

Kneading – Kneading dough can be done by hand (usually on a floured surface) or by machine. Kneading is done before the first fermentation and is the action that produces gluten. It is done by folding one side of the dough toward the middle and pressing it down, turning the dough one-quarter turn, and repeating the fold. These motions are repeated until the dough is smooth and elastic and passes the windowpane test.

Stretch and fold – An important kneading technique that encourages long gluten strands. The dough is left in the mixing bowl, taken by hand, and pulled out in one direction before folding it over the middle. The dough is then turned 90 degrees and this process is repeated in the remaining three directions. Stretch and fold takes the place of common kneading and can happen anywhere from three to 10 times during the initial fermentation.

Oven-spring – The quick and significant rise when a dough is placed in a hot oven. As the yeast warms it gets really happy and starts to produce a lot of carbon dioxide very quickly, creating a big “spring” in the bread. Oven-spring is best observed when dough has been scored.

Docking – Pricking a flat dough like pizza or crackers with a docking tool or fork. This keeps the dough from bubbling up when it is cooked.

Carryover cooking – The cooking that continues inside the bread when it’s removed from the oven. Hot steam is trapped inside the crust of the bread and will continue to cook the dough as it cools to room temperature. I try to never cut a hot loaf of bread because it will change the texture of the whole loaf. When the steam is released from the bread it evaporates and the crumb will dry out much more quickly than a loaf cooled to room temperature.

Boule – The French word for “ball,” used to describe an artisan round loaf.

Baguette – The French classic, a long and narrow loaf.

Banneton – A bread proofing basket usually made of concentric circles of willow branches. Bannetons are used in bread making at home and in commercial bakeries. They are especially helpful in supporting high hydration (soft) doughs so they can rise in a uniform shape. They give bread a distinctive artisan appearance.

Shaping – Shaping the dough is done after the first ferment and the punch down. It is the process that shapes the dough into a bun, boule, batard, baguette, sandwich loaf, roll, etc. Shaping is an important step that allows the dough to rise in a uniform and desired way by creating a tightly pulled outer layer of dough. 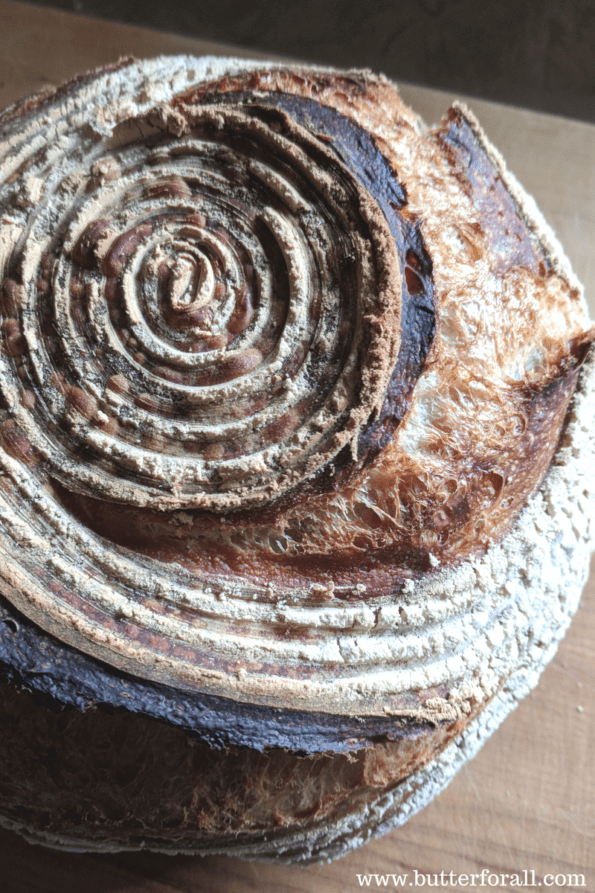 A homemade artisan sourdough loaf shaped in a banneton. Copyright Butter For All

Page 2. What Is Sourdough?

I am a beginner and I appreciate your very thorough articles. So helpful and something I plan on sharing with my daughter. 😊💕

One request… when viewing your articles on my iPhone, the DO NOT SELL tab blocks the left side of the screen making it difficult to read all of your instructions. If there is any way you could move that tab to another location, it sure would be helpful.👍

Thank you for your consideration. I look forward to being your student!

Thank you for your thoughtful note, I love hearing that you are getting your daughter involved in cooking and baking!

I'm so sorry there is a tab blocking you from accessing the site correctly. I'm not sure what the "Do not sell" tab is. So would you mind grabbing a screen shot and emailing it to me at courtney@butterforall.com please? I will check it out and see if it's something I can fix myself!

I’m very new to the sourdough world and am doing some reading before I fully commit. With your starter recipe, what size of glass container do you use? Some have said it can more than double in size... I want to have a big enough jar but not too big... Also, would a plastics twist lid work? I’m thinking it would breathe very well?

Thanks for being such a thorough sourdough resource for this newbie!

Welcome! Typically I use a quart jar or larger. I like to have lots of starter on hand for many baking projects. But it really depends on how much you want to keep. You can always switch containers if you need to make more or less. You are right, a plastic screw on ball jar lid works great! I also like locking lid jars with the seal removed. You'll have to keep me posted on your progress!!

Hi Courtney! Thank you for explaining all this. Is there a place where I can just buy this same sourdough-type bread from instead of making it myself??? I get a very inflamed joint when I eat gluten-containing bread, so I'm hoping this sourdough will fix the problem.

Do you have any local sourdough bakeries? Many times store bought sourdough will be soured with vinegar. But a lot of traditional bakeries still produce long-fermented bread. I'm happy to help you locate something if you provide me with your location!

Hello again! Can purchased sprouted wheat (lindley mills) be used in 1. Starting a starter and/or 2. Feeding the starter.

I love your site! Ellen

Hi Courtney! Thank you for your reply.

I completely understand what you are saying.

I have been very impressed with your quick responses.

Thanks for the kind words!

So sprouted wheat can be used in the entire sourdough process BUT it doesn't make any gluten structure so the bread will be very dense. It is best to use a combination of bread flour and sprouted flour if you want the bread to rise and have the flavor of the whole wheat. Because it's rather expensive, I personally use sprouted wheat for quick bread, cookies, and pastry. Things where it wouldn't be appropriate or are too difficult to ferment. I let the fermentation process take care of the un-sprouted flour in my bread recipes. Hope that makes sense!

Hope you have a wonderful sourdough journey!

I am diabetic and wondering how to calculate the carbs and fiber for the sourdough breads. Can you help?

So, unfortunately there is no definite way to calculate carbs for sourdough. The longer the bread ferments, the less carbs it has. As the yeast and bacteria eat up sugars the bread gets more sour. So a really sour sourdough, that has been fermented for 24+ hours will be the best for you. I would personally eat a small amount and then test blood sugar to see how the long-fermented bread affects you.

I hope this is a little help! Take good care! 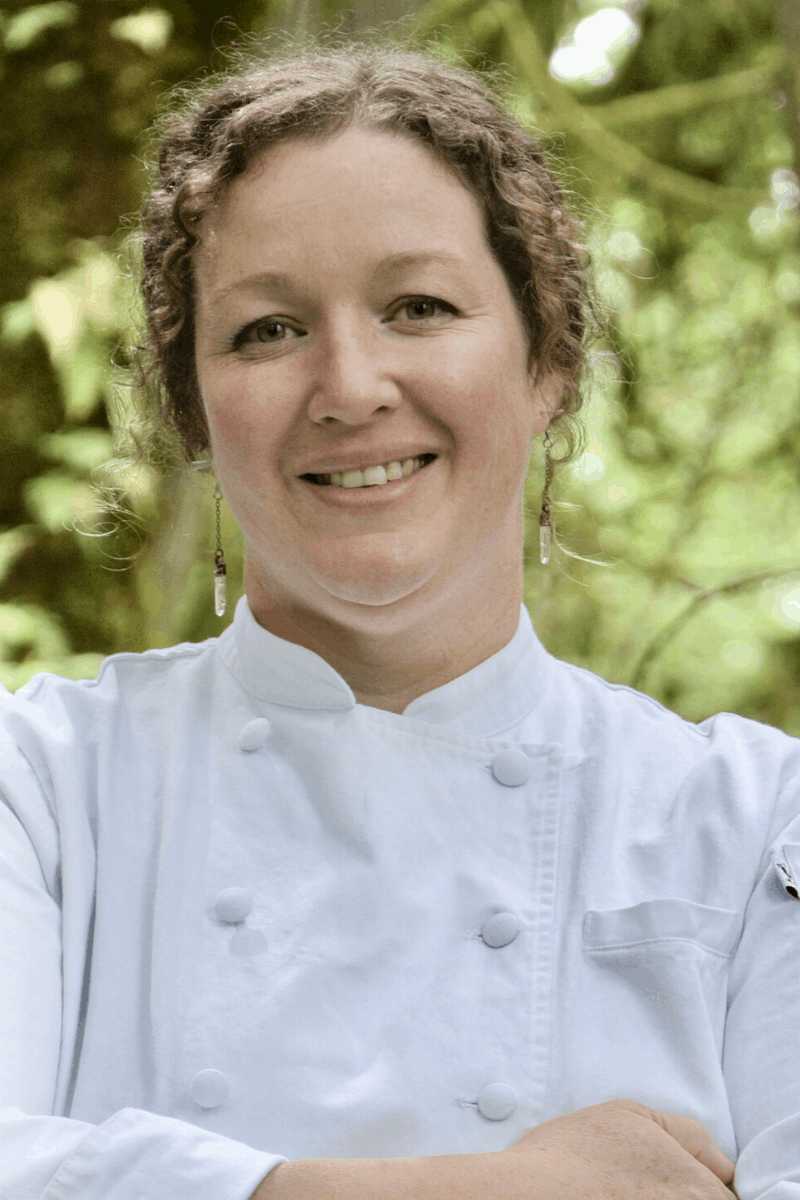